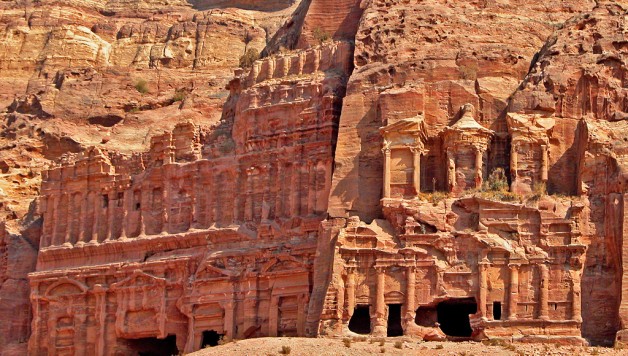 A Week in Jordan

Jordan is a fairly small country in the Middle East, but has a lot to offer. Despite being located between countries such as Iraq, Israel and Syria, it is arguably the safest place to go in the entire Middle East. There is so much to see: from biblical sites and desert castles to Roman ruins and the Dead Sea. Besides exploring historic sites, you also have the opportunity to relax and soak up some sun.

After arriving in the capital city Amman, you will start by spending 1-2 two days exploring this cosmopolitan and diverse capital city. Extremely modern buildings, restaurants and classy hotels share the city center with traditional workshops and cafés selling cardamom coffee. A day trip to the ruins of Jerash, located a short drive north of Amman, is obligatory. The ancient city was built more than 6,500 years ago and has been inhabited ever since. The ruins of the old city are nothing less than spectacular. Spend your evening in a local restaurant and sample some traditional Middle Eastern foods.

Get up early on the third day to drive south towards Petra, Jordan’s most popular tourist attraction and a true wonder of the world. It is a six hour drive on the 5,000-year-old Kings’ Highway. There are a few necessary stops along the way though. Mount Nebo, where Moses was granted a view of the Promised Land, offers spectacular views of the Dead Sea to the west. In Madaba, also known as “the City of Mosaics”, you can witness the 6th-century Christian mosaic map of Jerusalem and the Holy Land.

The sight of the “lost city” of Petra can’t be put into words. It is often described as the eighth wonder of the ancient world and it is a truly remarkable place. This one-of-a-kind city was carved into sheer rock walls by the Nabatean people two millennia ago. You can reach the city by walking through a narrow gorge between towering cliffs. The first construction that you will see after reaching the end of the gorge is the world-famous Treasury. Spend at least a full day here, either taking a guided tour or exploring this fascinating place on your own.

On the fifth day it will be time to get on the road again. This time, head north in the direction of the Dead Sea and through the stunning desert landscapes of Wadi Rum with their massive monolithic rocks formed with the aid of wind and time. After arriving at your hotel near the Dead Sea, put your feet up and relax.

The last two days should be spent relaxing in and around the peculiar Dead Sea. At 1,300 feet below sea level, this lifeless expanse of water is the lowest point on the surface of the earth. The Dead Sea is landlocked and once the waters from the feeding rivers reach it, they evaporate and leave behind salts and minerals. Enjoy a bath or massage in a spa, learn about the significant history of the region or read a book while floating in the dense salty water. Drive back to Amman on the evening of day seven for your flight home.